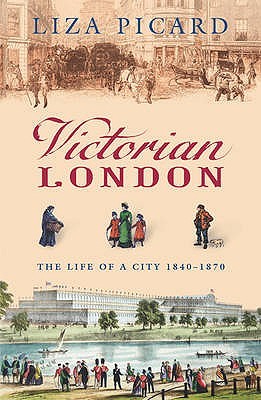 It’s fitting that Liza Picard should begin her survey of early Victorian London with a chapter on that least regarded of the senses, smell – the little pinky, as it were, on our round handful.

For no other of the five is as redolent of memory or can conjure a long-forgotten past with such force. Remembering begins in the nose.

Lizx this, the fourth in her series of London histories, Picard’s aim again is to reconstruct the sights, smells, sounds, tastes and feel of the place during that remarkable transformation from a city of fewer than 2m souls to the metropolis at the heart of empire and the very crossways of the vicyorian world.

London in the s, before Joseph Bazalgette got to work on the sewerage system that is one of the glories of that age, was a stinking place. Quite apart from the tides of human excrement that flowed daily into the Thames through inadequate sewers at Westminster and Deptford Creek, there was, travelling eastwards, the slowly accreted effluvium of industry: By the time the river reached Woolwich, as Punch reported sardonically in”those situated in the lower course of the stream get the Thames water in the highest perfection”.

Picard is particularly good on the sort of thing that contemporary chroniclers didn’t always think to put in: By the late s, many houses were connected to a primitive water mains, the service being supplied by one of any number of private companies.

Charles Dickens was one of the few to pay the extra, and his frustration with the service rings clearly down the years: Thus the book proceeds, by typifying anecdotes, which are well chosen and impeccably annotated, and all linked together by Picard’s untroubling, readable prose. She has no particular thesis to advance. But though the book is well seasoned with statistics, figures and dates – did you know that in the mids a top-of-the-range velocipede, complete with umbrella and sketch desk, would set you back guineas?

For one thing that defines the era is the mania for measurement and classification, as much in social studies as in natural history. It might almost be said that the Victorians conquered the world with ruler, lens and weights. My wife is descended from a cheesemonger from Upper Holloway – he might have been a near-neighbour of the Pooters – who spent his spring and summer holidays riding in brougham, phaeton or dog-cart round the coast of Britain, taking measurements of the distances travelled.

It took him six years. The notebook he left has little in the way of observation, beside each day’s bare tally of miles. It’s hard to think of a more heroically pointless endeavour. It’s inevitable that readers will quibble over omissions: As James Grant wrote in his Sketches in London in”any work, professing to treat of Babylonian life and habits, which did not embrace this subject, would be manifestly incomplete”. There’s no shortage of other works to supplement any lack here.

Towering above all of them, as the dome of St Paul’s once did over the city, is Henry Mayhew’s magisterial survey London Labour and the London Poor, from whose pages the voices of the poor and disregarded still echo so loud and so clear.

It’s no discredit to Picard to say that her book is not in that class; it is nevertheless a very welcome addition to the skyline.

Stink or swim Adam Newey welcomes a new addition to the growing metroplis of capital literature, Liza Picard’s Victorian London. BBC Sports Personality of the Year — in pictures Bradley Wiggins capped his remarkable sporting year by taking home the big prize at the ceremony in London. A glass of wine with a rough sleeper, Santa in trunks, a thousand partying Muscovites … in a My Best Shot special, top photographers pick the image that sums up winter for them.