How do you know all of this background and tertiary information? I’ve been a champion of this adventure for ages so I’ve tried to find out as much about it as I can, and whenever it or its authors come up I pay attention and remember: I did have this but I believe it got lost with a stack of rpg stuff that I bought when I was in Florida in the late 80’s.

I came back to NY and the shit hit the fan over some family dispute and that got lost in the scuffle. Gary’s Necropolis is what would’ve really been the big-league debut of the line, but of course they ran out of money and closed up shop before they could release it.

I have this adventure, bought it new.

It’s goox to learn some if its history. I tried to run it a couple of times, but couldn’t hold player interest. I’ll attribute that more to my own failing as a DM than lay it all at the feet of the adventure itself.

I never quite grokked it, even though it was very much in the vein of the puzzle and funhouse dungeons I enjoyed.

Greek Africa, and Town of Baldemar. Aesheba is an interesting setting, though it seems a bit thin and concentrates too much on the “lost civilization” Greek colonies.

I like Baldemar a lot. The more I read it, the more intriguing it became with webs of connections between characters all around the town. The main fault I find is along the lines of what you say about it being vanilla. While I wouldn’t quite call it that, it is frustrating that it limits the fantasy elements that it hints at. I’m sure that was purposeful, to make it customizable for everything from very low fantasy settings to flashier examples of the genre.

But it suffers from trying to be too accommodating to too many styles of fantasy. But there is a core of good stuff in there, in my opinion. I abduciton much the same criticism is true of Aesheba: Greek Africa, which could be used for everything from a Tarzan adventure to Isle of Dread play, but is so noncommittal to a given style that it ends up with a generic sheen, or lack thereof. Hmm, so Schar Niebling saw a link to this article on Facebook and wasn’t too impressed by it, ling it’s “amazing how many things [I] got wrong.

I’ve reached out to her for more info, and if she responds I’ll happily make edits or include an addendum with her corrections. Fun comments over on Facebook in a link to this post: That’s interesting – after Gygax passed away and The Collector’s Trove was auctioning off his stuff, I purchased 3 items from Gary’s collection whose prices didn’t end up going into the stratosphere: They all came with abducfion of provenance.

That doesn’t exclude the story about the cons; possibly that’s where this copy came from.

Abduction of Good King Despot, The

It’s also possible that copy was stored away somewhere and he thought it would be easier to ask the con-organizers to procure new copies for him than to look for it: The Gem and the Staff. Schar Niebling, as far as I know, is Will’s wife. Russ Stambaugh was a student at the Kin of Michigan and presumably a member of the Xbduction at the time this adventure was written, and later went on to a distinguished career outside of gaming as a psychologist and sex therapist.

From what I gather, it was originally written sometime in the late 70s and was probably gpod as a tournament module. Gary picked up a copy and carried it around with him to run for impromptu games.

After parting ways with TSR in and founding New Infinities Productions as a successor company, Gary was looking for things to publish. A few more titles had been announced but not published by the time New Infinities folded in lateincluding Gary’s own Necropoliswhich I was lucky enough to participate in a couple playtest sessions ofand which later resurfaced first as part of the Dangerous Journeys rpg in and then in a conversion for the “d20” system by Necromancer Games in But by far the most noteworthy and memorable of those Fantasy Master products that actually got published was The Abduction of Good King Despot.

The adventure despor a perhaps the quintessential example of a “puzzle dungeon” another example of which is TSR’s module C2: The Ghost Tower of Inverness – which, probably not coincidentally, was also originally run as a tournament by the MDG at Wintercon ‘ I don’t like to give too many spoilers about this adventure’s structure, because figuring out its logic is a big part of the challenge and fun of the adventure, but I’ll do so anyway skip the next, indented, paragraph if you don’t want to know: The premise of the adventure is that Good King Despot has been kidnapped by the insane wizard Ignax, who has set up the dungeon as a test for would-be rescuers.

The dungeon is a linear gauntlet of 13 encounters thematically tied to the signs of the Zodiac, in order Aries room followed by Taurus room followed by Gemini room, etc. Oc of the main Zodiac encounters has as its treasure a large gemstone corresponding to that sign diamond for Aries, emerald for Taurus, etc. The encounters start out as straightforward melee slugfests Aries is a group of berserkers with ram-horned helmets, Taurus is a pair of gorgons, Gemini is twin frost giantsbut as they proceed dsepot become trickier and require less combat and more puzzle-solving the Libra encounter is a room with a shifting floor, the Aquarius encounter is a room that gradually fills with water, etc.

I’ve run the adventure several times, and can attest that the further the players get into the dungeon the more the tension ratchets up and the more engaged they become, and as they overcome each challenge and especially if they make it to and overcome the final challenge there’s an escalating series of cheers and high-fives.

Successfully completing this adventure feels like a true accomplishment. It’s no wonder Gary was so fond of this adventure. It’s got seemingly everything he liked best in the game – it’s fast-moving, action-heavy, has a lot of clever puzzles to gopd the players’ problem-solving abilities, and doesn’t take itself too seriously.

It includes numerous pun-type jokes and “anachronistic” cultural references to Shakespeare, Oscar Wilde, etc. The tone and feel reminds me a lot of Gary’s own Dungeonland and The Land Avduction the Magic Mirrorand I suspect is a fair representation of the mode of play in his Greyhawk Castle dungeons, before things became so serious.

In fairness to Frank, he’s not the only one who feels that way.

In recognition of that, New Infinities framed the adventure as an intentionally “retro” experience as far as I’m aware the first rpg product to be marketed that waywhich in retrospect is sort of a mixed blessing. On the one hand it allowed the adventure to be published in its full “funhouse” glory instead of attempting to water it down to conform to then-contemporary tastes, but on the other it caused them to exaggerate the old-fashionedness and “wackiness” in a way that feels like aabduction were making excuses, that they were trying to create an ironic distance from the material as a defense against criticism.

So we get a booklet of illustrations because that’s a visual signifier of retro-ness because old modules like S1, C1, and S3 had them even though most of the illustrations are pointless and unnecessary many of them are just portraits of the room’s monster that don’t convey any additional info beyond what’s in the boxed-textand we get a lot of apologetic “this is how things used to be” and “Ignax is a crazy goid – don’t think about it too hard” asides in the text, and we probably get more “jokey” encounters like the Gnax Family portrait gallery and the talking goldfish than we otherwise would have.

In fitting with the times, there’s also a full page of read-aloud backstory introduction about how the party was gathered together fespot sent on the rescue mission by Ignax’s rival wizard Candelabra who’s busy schtupping the queen and doesn’t seem all that eager to see the king return – which is presumably why he’s sending a bunch of adventurers on the mission instead of doing it himself which is both not as funny as it seems to think it is and entirely dispensable.

This is not an agduction for theorists – it’s an adventure that comes alive at the table, that gooc in the moment. As is probably obvious by now, I really like this adventure and consider it one of my very favorites. 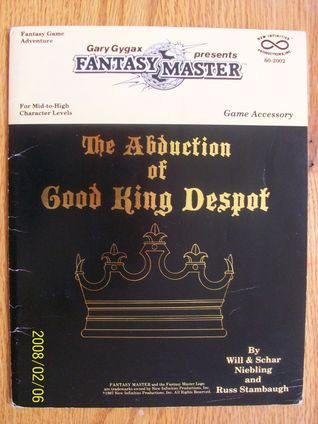 I’ve run it three times once all the way through, twice partially and it’s always been a huge hit with the players. The only drawback there is that as-published I’ve found it to be too long to play through in a o session.

I’ve found it takes sessions to get through. Gary used to run it in a single session and was still running deepot as late asbut he used the original version, which was likely shorter than the published despit – possibly including only the core abcuction and not any of the red-herrings, which would definitely make it quicker, but would also lose some of the charm a lot of the red-herring rooms are really fun!